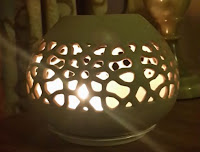 Since early October, I have been telling Anna that Deepawali is around the corner. He has no recollection of last year's Deepawali.  He was unwell enough to be in hospital, on a nebuliser for 5 hours. So this year, he has asked me when Deepawali is, twice a day, for the entire month!! 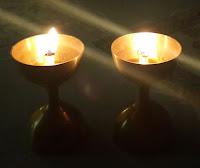 Like most South Indians, we celebrated Deepawali for Anna on 29th. Normally the puja, crackers, and Deepawali feast is all finished in the morning. As Anna is sleeping most of the morning, I decide to do all this in the evening. He is tired and disoriented, and he can not even strike a match to light a deepa for puja. He gives gifts to all his staff (including their children).


He can't sleep on 29th night as the fire crackers keep him awake. So on 30th (Deepawali day in North India), he sleeps most of the day and is groggy, disoriented, and slurring with a low response rate to even direct question.

As expected the firecrackers are even worse on 30th night. It starts with my father's neighbor solicitously inquiring if I have given Anna a sedative so that he can sleep while they burst crackers, right outside his bedroom window, for a few hours! Seriously!?! I know it is going to be terrible when I see Mr. Neighbor take crackers out from the overflowing boot of a Maruti Esteem.


I am dumbstruck. At a complete loss to understand what this neighbor is thinking.

On 31st evening Anna is quite a chatty-cathy with me. He tells me about the Deepawali fire crackers of his childhood.

First there were the hand-made wire sparklers. It seems that they would buy thick wire and cover it with a paste of sulfur, aluminium powder and local glue. This sparkler did not need a high temperature to burn (just ~400◦C vs the minimum of 1000◦C). It was a cheap solution as there was never really any money to spare to burn in their family.

Then there was the atom bomb! It was a large iron rod with a hollow bolt at one end. This bolt was filled with a mixture of sulfur and potassium permanganate, packed down and tied with string and cloth. Then they would run around the village hitting it against walls (including temple walls) to create a huge bang! The iron & hollow bolt contraption was safely hidden after Deepawali to be taken out for the next Deepawali, as the village blacksmith made the contraption for a couple of annas.

There were also match box burners. It seems that they spent all year (from one Deepawali to the next), collecting matchboxes. They then built a matchbox snake. A matchbox was inserted about 1/3rd the way into another matchbox to create a snake-chain. If they wanted to have a bigger fire, pieces of wood were inserted into the matchbox snake. Then this was lit at one end and watched as it burnt, flames suddenly jumping when they hit the dry tinder in the snake-chain.

He says the most fun he had was with box trains. It seems that he and his brothers would save every box they could lay their hands on. Then tie them with string to create as long a train as they could. These were just boxes tied with string that they dragged around the house making steam-train noises. Then at the end of the day, all these trains went into a big bonfire.

It takes a lot of patient questioning to get the details from him. I am fascinated as we chat for nearly 2 hours of simple pleasures at a simpler time.

I leave him exhausted and asleep on the sofa. 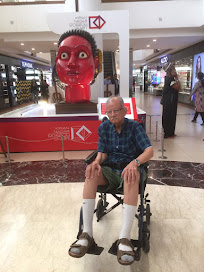 My father, K V S Murthi, was born in 1928. My grandfather was the village school teacher and my grandmother a housewife. He was called Anna (elder brother) by his siblings and naturally, so did we. His pet name is Cheenu.
My grandparents were conservative Kannadiga Madhavas, yet my grandfather sent Anna to boarding school at the age of 12 to ensure he had a good education. Yes, Anna is a self made man, but what we hold most dear are stories of his life, jokes, his free spirit, his adaptability and openness to new things.
Anna's Parkinson's was diagnosed in 2007. He now also has mild Dementia and Diplopia.
These blog posts are stories of his life. From childhood to now. Tales that have been told to me, and as I remember them. Tales that show how his life and that of his caregivers has changed and continues to do so, as the disease progresses.

Sang
After working in corporate India for >30 years across functions like HR, Training, Operations and P&L Management, I took some time off from a 9-5 career to do consulting & coaching assignments. I have since then co-founded Diversity Dialogs, a management consulting organization focused enabling organizations to reap the benefits of better diversity in their workforce.

In Sang's Ramblings, I share my perspectives on corporate life. I believe that my experience as a P&L and Operating Leader has enabled me to bring new perspectives to HR challenges ensuring that HR has a “seat at the table” in all business decisions.

I also believe that every individual is their own best human resource manager. I hope Sang's Ramblings helps them manage themselves too!!

In Diversity Dialogs, we share experiences and insights on diversity and inclusion in corporate India.